How can you determine the number of neutrons in an atom?

How do we determine the number of neutrons in a given atom?

First, let’s define some terms that you’ll need to be familiar with.

• The atomic number of an atom is the number of protons in the nucleus of that atom.

• The mass number (also called the nucleon number) of an atom is the total number of protons and neutrons in the nucleus of that atom.

• Finally, the relative atomic mass (symbol Aᵣ) of an element is the weighted average of the masses of the atoms of every isotope of that element.

The unit of this quantity is the atomic mass unit (a.m.u), which is defined as 1/12 of the mass of an atom of carbon-12, that is the isotope of carbon with 6 protons and 6 neutrons. 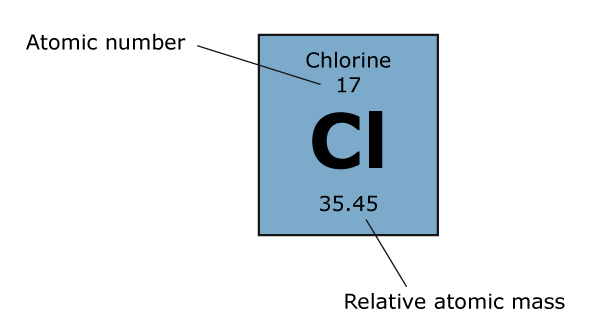 That’s a lot of information – let’s look at chlorine as an example.

Remember – the atomic number of an element is constant for all isotopes, since it is the number of protons that actually defines which element an atom is.

To calculate the relative atomic mass of chlorine we have to take the weighted average, so the calculation looks like this:

The real answer, 35.45, seen in the periodic table, comes from all the other minor isotopes we didn’t consider, but 35.5 is a good enough answer because all these other isotopes aren’t really relevant. You’ll notice that 35.45 rounds to 35.5 to three significant figures anyway.

Determining the number of neutrons

So what about neutrons?

But how do scientists work out which isotopes of an element exist in significant proportions? The key is mass spectrometry.

Mass spectrometry is a way of measuring which isotopes are present in a given sample of an element. If you take a mass spectrum of chlorine, for example, you get a graph that that looks like this: 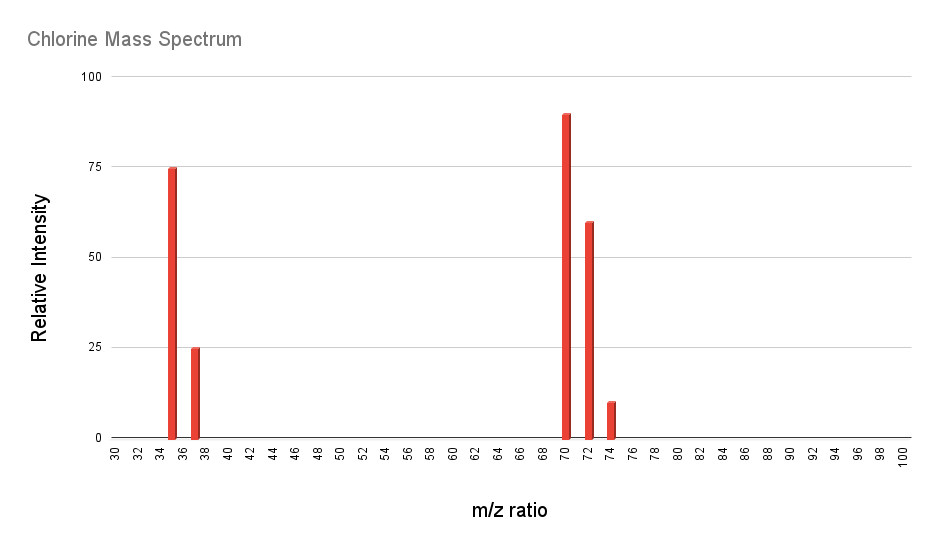 The y axis corresponds to the relative abundance of each signal, the x axis is the mass to charge ratio, m/z.

For this spectrum the charges are all just +1, so this axis just corresponds to the mass of the isotope that gives each signal.

We know that chlorine exists as a diatomic gas, Cl2 – that’s why we see signals way up around 70. The most interesting part is the two signals at 35 and 37. These correspond to atoms of chlorine, specifically the isotopes Cl-35 and Cl-37.

The abundances are approximately in the ratio 3:1, and this is how a scientist would work out which isotopes exist and in which relative quantities they are present. The above spectrum is simplified a little bit, as there would be very small quantities of other isotopes as well, but we don’t need to worry about these.

We use cookies on our website to give you the most relevant experience by remembering your preferences and repeat visits. By clicking “Accept”, you consent to the use of ALL the cookies.
Do not sell my personal information.
Cookie SettingsAccept
Manage consent

This website uses cookies to improve your experience while you navigate through the website. Out of these, the cookies that are categorized as necessary are stored on your browser as they are essential for the working of basic functionalities of the website. We also use third-party cookies that help us analyze and understand how you use this website. These cookies will be stored in your browser only with your consent. You also have the option to opt-out of these cookies. But opting out of some of these cookies may affect your browsing experience.
Necessary Always Enabled
Necessary cookies are absolutely essential for the website to function properly. These cookies ensure basic functionalities and security features of the website, anonymously.
Functional
Functional cookies help to perform certain functionalities like sharing the content of the website on social media platforms, collect feedbacks, and other third-party features.
Performance
Performance cookies are used to understand and analyze the key performance indexes of the website which helps in delivering a better user experience for the visitors.
Analytics
Analytical cookies are used to understand how visitors interact with the website. These cookies help provide information on metrics the number of visitors, bounce rate, traffic source, etc.
Advertisement
Advertisement cookies are used to provide visitors with relevant ads and marketing campaigns. These cookies track visitors across websites and collect information to provide customized ads.
Others
Other uncategorized cookies are those that are being analyzed and have not been classified into a category as yet.
SAVE & ACCEPT