Learn the rules for ionic compounds

Background: How ionic compounds are formed

Ionic compounds are formed from the electrostatic attraction of oppositely charged ions.

The ions are arranged in such a way that they form a giant crystal lattice of alternating positive and negative ions.

An example of an ionic compound is sodium chloride, NaCl, also commonly known as table salt. 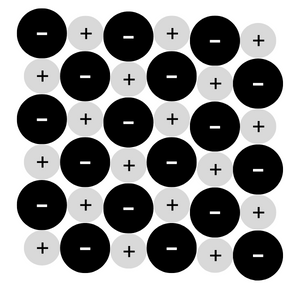 Look at the periodic table to obtain the ionic charges of sodium and chlorine. Balance the charges using the table below:

Look at the periodic table to find the ionic charges of calcium and chlorine:

The net overall charge must be 0, so we need 2 Cl ions to balance the charge of 1 Ca ion. The ionic formula is CaCl₂ Subscripts in the chemical formula indicate the number of atoms.

Transition metals’ charges vary but the charges are always positive.

If the iron 2+ ion combines with chloride, what is the formula of the compound?

If the iron 3+ ion combines with chloride, what is the formula of the compound? 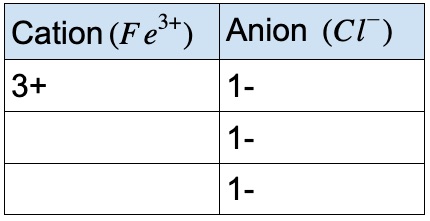 We need three Cl– anions to balance the charge of one Fe3+cation.

Lead has 2+ charge. Oxygen has 2- charge. What is the ionic formula?

What is the formula of the compound AgCl?

Transition metals that do not require Roman numerals

To find the Roman numeral for the element, first refer to the periodic table.